Wednesday, March 29, the sixth edition of the Gala Forbes Woman took place, an event that celebrates the work of those women in Romania who are authentic and strong models, whether they became made known in business, politics, philanthropy, public relations, education or sports. This Awards Gala is not only the way in which Forbes Romania recognizes the involvement of women and their active role in a business environment that continues to grow, but also the reflection of the sixth edition of  “Top 50 most influential women in Romania”. This year, the first position is occupied by Ms. Anca Vlad, followed by Princess Margareta of Romania and by Ms. Laura Codruta Kovesi. Here’s how Forbes describes the first position in “Top 50 most influential women in Romania” in its printed edition: 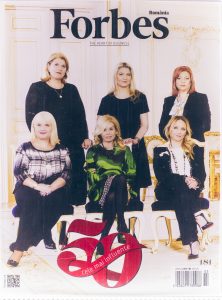 “Anca Vlad, the founder of Fildas Trading (one of the strongest local distribution companies) and Catena (the largest Romanian  pharmaceutical retail network) is an example of an entrepreneur who started with confidence, building within 25 years, a valuable business, which employs currently over 5 200 people. Catena counts at the end of 2016, 622 pharmacies and 5 shops with medical technical products. Also, Catena is among the most powerful Romanian brands, the value of the investments in communication and promotion rivaling to that of multinationals. Trading Fildas achieved last year a turnover of 539 million Euros and Catena of 612 million Euros. Anca Vlad has also developed a media group (online television, sites, magazines, advertising and PR agency). She has asserted herself as a supporter of the Romanian artists, one of her concerns being the Senso Contemporary Art Gallery.”