With its second edition, the annual “Romanians developing Romania” focuses once again on the strongest Romanian entrepreneurs, those who, by their business and brands, constitute points of reference for Romanian economic and social life.

“Romanians developing Romania” is an Intact Media Group project, which presents 100 Romanians and their business, which incur value to the national economy, thus having a decisive contribution to the development of this country.

“Talking about the people that have succeeded is vital to the health of society. Yes, they have succeeded in constructing something which, in the eyes of the majority, translates into fortune or fame, but, in fact, this is about a construction that contributes to the wellbeing of a larger group”, stated Alessandra Stoicescu, Executive Manager of the publication, in the editorial opening this publication.

This is not about the richest, nor about the most influential Romanians, but about those Romanians “who develop Romania through the workplaces they created, through the potential provided to the areas where they started their businesses, through the higher taxes they pay to the state in proportion to the turnovers”, according to the text substantiating this journalistic endeavour.

The second most important Romanian entrepreneur, after the Paval brothers – the founders and owners of Dedeman, in the catalogue “Romanians developing Romania” is Anca Vlad, the strongest woman-entrepreneur in Romania. The journalists of Intact Media Group write about Anca Vlad that she has consolidated her position as a leader in the pharmaceutical retail sector, the companies she created totalling, in 2015, a turnover of 2.986 billion RON. 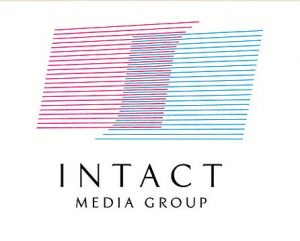 The main criterion in establishing the hierarchy of the entrepreneurs was the aggregate turnover of the businesses they conduct, according to the financial data available from the Ministry and Finance and the Trade Register, therefore the reference year was 2015. Only companies that are 100% Romanian were included, considering the shareholders, as well as the operations.

Anca Vlad – an entrepreneur and more

The journalists of Intact Media Group write that “Anca Vlad is, perhaps, the best-known business woman in Romania, the founder of the distribution company Fildas Trading, as well as of the Catena pharmacy chain, the market leader in the industry. After a considerable advance of business in the year 2015, Fildas Trading became, in 2016, the most important Romanian company in the pharmaceutical area, and one of the top five companies with domestic private capital. In the first year, the number of employees has grown by more than 100 persons, reaching 860, while the turnover exceeded 500 million euro, the most dynamic among all market players.

With such numbers, extension is the signal word. The investment plan of the company Fildas Trading includes the construction of a logistic centre at Iasi, the development of the logistic capacities in Bucharest and Cluj, as well as the extension and upgrade of the offices held in Bucharest.

The Catena pharmacy chain, the driver of the business, exceeded 620 units at country level last year, and the entrepreneur emphasized that this expansion still continues. The Catena brand was created in 1999, at the time when Filas Trading took over the majority of shares in the company Argesfarm. 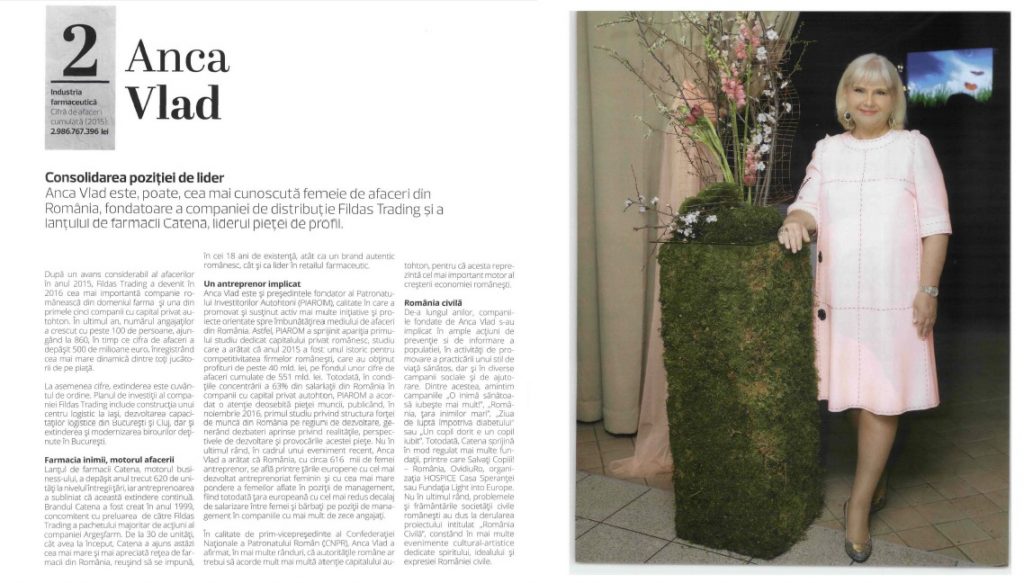 Anca Vlad is also the founding president of the Local Investor Employers’ Association (PIAROM), in which capacity she actively promoted and supported several initiatives and projects oriented towards improving the business environment in Romania. Thus, PIAROM supported the first survey dedicated to the Romanian private capital, a study which indicated that the year 2015 was a historical year for the competitiveness of Romanian companies, which acquired profits of more than 40 billion RON, against the background of an aggregated turnover of 551 billion RON.

As First Vice-President of the National Confederation of Romanian Employers (CNPR), Anca Vlad has repeatedly stated the Romanian authorities should pay more attention to the domestic capital, as this represents the most important driver of Romanian economic growth.

Over the years, the companies established by Anca Vlad have become involved in ample actions for the prevention and information of the population, in activities promoting a healthy lifestyle, as well as in various social and relief campaigns. (…).”, according to the journalists who completed the catalogue.