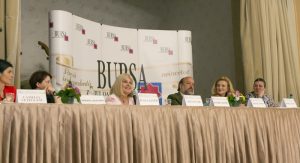 BURSA newspaper organized on Wednesday, April 26, 2017, the 5th edition of the “Women in Charge – A Better World” FEMALE ENTREPRENEURSHIP Conference, in partnership with the National Association of Entrepreneurs. Anca Vlad, the Honorary President of the Romanian Investors’ Employer Association (PIAROM) declared in the event that Romania was in one of the top places in the European Union with respect to the number of female entrepreneurs and women in leadership positions in private companies.

She also mentioned: “There is this idea that women in leadership positions, unlike men in the same positions, are too focused on the emotional side. Research proves otherwise, however. The decisions taken by female entrepreneurs are more often than not based on both intuition and reason. The Romanian private sector has understood this aspect, our country being in one of the top places in the European Union regarding the number of female entrepreneurs and women in leadership positions in private companies.”

Nevertheless, the private sector continues to be an area that poses numerous obstacles for women, Mrs. Vlad added, mentioning that Romania is in one of the last places in the European Union in respect of women’s involvement in public life from decision-making positions: “We refer here both to parliamentary activity and to public companies.”

According to her, in the month of February we had approximately 616,000 female entrepreneurs, 454,000 of whom were shareholders/partners in companies and 162,000 were self-employed (PFA or individual/family businesses).

The percentage of female entrepreneurs in companies is around 37%, with a tendency to grow (even if a relatively slow growth rate, of around 1% over the last five years), Anca Vlad also added.

She stated that: “Surprisingly enough, the «engines» are not Bucharest or counties like Ilfov, Cluj or Timis, but counties in the South-East region of the country – Tulcea, Braila, Galati – with percentages of over 40%. In terms of start-ups, the situation is even more encouraging: 47.6% of start-ups have been founded by women, peaking in the South-East (54.4%) and West (56.6%) regions. 64% of the entrepreneurs in the Romanian health and social sectors are women, a significant percentage of 58% above the European average.”

The founder of PIAROM also wanted to outline that we possess a high educational potential for female entrepreneurship: “According to the latest PISA surveys, Romania is among the 8 European countries (next to Finland, for example) where girls have obtained higher grades than boys in the Science subject matter.”

Women’s position in the private sector paints an encouraging image, outlining a perspective of development for female entrepreneurship, she concluded, adding that: “At the same time, women’s position in public decision-making situates us, in the European Union, in a shameful 3rd place at the bottom of the list, with only 14.2% women parliamentarians. Worse than us are only Malta and Hungary. Poland, a country which represents the European average, has a percentage of women parliamentarians twice as high. It should be noted that France, Sweden and Bulgaria have governments made up of almost 50% women. We believe that it is high time for the state to generate those public policies that could lead to a growth in women’s involvement in politics and in decision-making positions in state companies.”