In March, “Capital” magazine is publishing the stories of successful Romanian women. Every day, on the capital.ro website, you can find a story of a successful Romanian woman, extracted from the latest issue of Capital’s Top 50 Successful Women, which appeared at the end of last year. The story of Anca Vlad, founder of Catena, was published on March 3rd. Below, you have the full article that appeared in “Capital”: 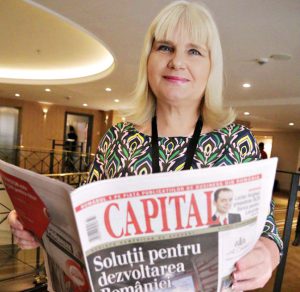 Anca Vlad discovered her passion for economics in high school. At that time, the teacher who was teaching her economics advised her to go to a specialized faculty, which is what she did. She attended the courses of the Bucharest Academy of Economic Studies. In 1980, thanks to the results she obtained over the course of the years and at the graduation exam, she has received a repartition to Bucharest, at a company in the lumber industry – the current Silvarom. The professional experience acquired in the seven years she spent working in the export of furniture – a field of activity where she rose to the position of the export activity coordinator -, would help Anca Vlad in the following steps in her subsequent life as an entrepreneur.

“My first mentor, during my career, was Andrei Menhardt, the then manager of Silvarom”, Anca Vlad recalls emotionally. “In my spare time and on holidays, I was working as a translator for international conferences and then as an event organizer for the Chamber of Commerce and Industry of Romania (CCIR). This is how I met some people from many international drug companies, as chemistry was my specialty as a translator”, said Anca Vlad. In 1987, the opportunity to work for the CCIR arose, as national manager for a large foreign company – SmithKline Beecham Pharmaceuticals, from England. In May of 1990, she establishes the first marketing consulting firm in Romania, and she hits the jackpot in the entire country with one of the first contracts. If you still remember the toothpaste commercial “Aquafresh in three colors”, then you should know that this slogan belongs to Anca Vlad.

A year later, she lays the foundations for the Fildas business, a firm that she started with only 7 employees. Nowadays, the Fildas-Catena group reached over 5,000 employees and a consolidated turnover of 452 million euros. How did she manage to build a top business? The answer comes directly from Anca Vlad: “The firm’s most important capital is trust. Actually, this is also our motto. It is a company where the relationship between our suppliers, us and our clients is based, first and foremost, on trust. We have a very good reputation both within our country, and abroad.”

Anca Vlad’s passion, ever since she was a student, was and still is fine art. For 15 years, the Fildas Art Foundation organizes exhibitions of paintings, sculptures, ceramics in Bucharest, in other cities from within the country, abroad, sponsors valuable artists in the development of projects, she organizes annually the International Workshop of Creation from Eforie, she publishes albums and art catalogues and she hosts monthly, at the Senso Gallery, large-scale cultural events.

2004 – she won the gold medal for “Business Practice Excellence”, at the fourth International Forum for Business Practice Excellence, organized in Geneva;
2004 and 2005 – she is first in the rankings of successful women, edited by Capital magazine;
2005 – the Fildas company was nominated by Europe Business
Assembly (EBA), Oxford – England, for the prize “The best company in Europe”;
2005 – she receives the title of “Manager of the Year” from the Institute of Directors – London;
2014 – she was a finalist at the EY Entrepreneur of The Year;
2015 – the network of Catena pharmacies is nominated and awarded at the Capital Awards Gala in the category “Strongest companies in the Romanian business world.”