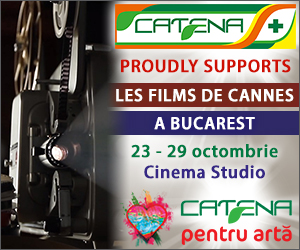 Mr Tudor Reu, one of the event organisers, declared: Les Films de Cannes à Bucarest is a festival initiated by director Cristian Mungiu in 2010, together with the general delegate of the Cannes Festival, Thierry Fremaux. It started as an idea to bring over to the Romanian public the films awarded at Cannes which, in those days, had a significantly smaller distribution rate in our country. Every year, the number of films increased, as did the number of guests, which led us to have once again this year, as a guest at Films de Cannes, the Palme d’Or winner, who will come and present their film for the first time in Bucharest, on October 25, at Cinema Studio. The three cinemas which will run the movies are Studio, Elvire Popesco of the French Institute, which is also our traditional partner in organising Les Filmes de Cannes, and Cinema Pro. For the past few years, we have been enhancing the idea of a simple Cannes movie showcase towards a more complex cinematographic manifestation, comprising debates, workshops and master classes held by the guests. The main guests are: Jacques Audiard, the latest winner of Palme d’Or, who will come, present his film for the first time and hold a master class at the University of Theatre and Film; actress Emanuelle Bercot, who won the award for best actress at Cannes this year, but who opened the Festival with the film that she directed and will also open Les Filmes de Cannes in Bucharest with the same film; the Croatian director Dalibor Matanic and the general delegate of the Cannes Festival, Thierry Fremaux, who will close the festival with a novel event, the films of the Lumiere brothers, which he restored and will present for one hour and a half on the stage, accompanied by his own commentaries in English.”

Across a five-year span, Les Films de Cannes à Bucarest has become one of the most ample cultural events in the Capital city. Last year it brought more than 14,000 spectators in the cine halls, numerous films were run with all tickets sold out, whereas almost half the total number of tickets were purchased prior to the commencement of the festival. Upon the request of the audience, additional projections were organised, after its conclusion. In October, Les Films de Cannes à Bucarest shall bring tenths of films for the very first time in Romania, with over 100 projections, some of them scheduled to run in the presence of film-makers, master classes, round tables, retrospectives and other special events.

This year, Catena is a proud supporter of the event, as it chooses to do whenever artists and their initiatives, activities and works are in the limelight.